Plant- Based Burgers Stack Up

The new generation of veggie burgers aims to replace the beefy original with fake meat or fresher vegetables. To find out how well they do, we ran a blind tasting of six top contenders. By Julia Moskin. 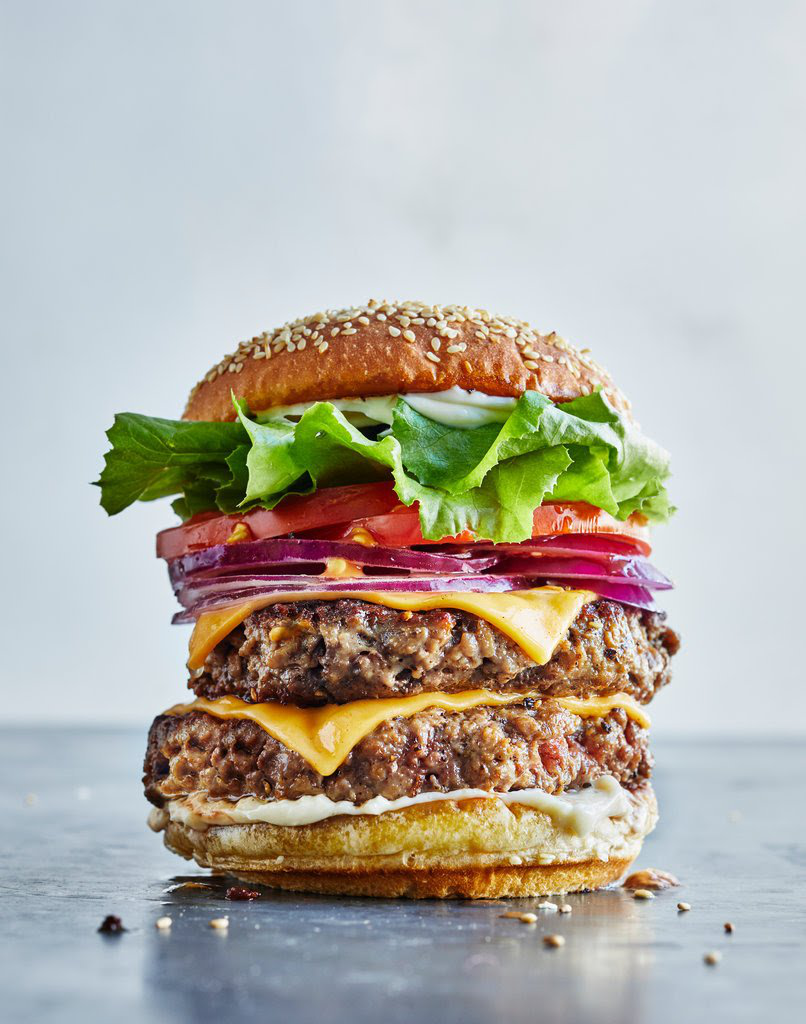 In just two years, food technology has moved consumers from browsing for wan “veggie patties” in the frozen aisle to selecting fresh “plant-based burgers” sold next to the ground beef.

Behind the scenes at the supermarket, giant battles are being waged: Meat producers are suing to have the words “meat” and “burger” restricted to their own products. Makers of meat alternatives like Beyond Meat and Impossible Foods are vying to capture the global fast-food market, as big players like Tyson and Perdue join the fray. Environmental and food scientists are insisting that we eat more plants and less processed food. Many vegetarians and vegans say the goal is to break the habit of eating meat, not feed it with surrogates.

“I would still prefer to eat something that’s not lab-grown,” said Isa Chandra Moskowitz, the chef at the vegan restaurant Modern Love in Omaha, where her own burger is the most popular dish on the menu. “But it’s better for people and for the planet to eat one of those burgers instead of meat every day, if that’s what they are going to do anyway.”

The new refrigerator-case “meat” products already comprise one of the fastest-growing segments of the food industry.

Some are proudly high-tech, assembled from an array of starches, fats, salts, sweeteners and synthetic umami-rich proteins. They are made possible by new technologies that, for example, whip coconut oil and cocoa butter into tiny globules of white fat that give the Beyond Burger the marbled appearance of ground beef.

Others are resolutely simple, based on whole grains and vegetables, and reverse-engineered with ingredients like yeast extract and barley malt to be crustier, browner and juicier than their frozen veggie-burger predecessors. (Some consumers are turning away from those familiar products, not only because of the taste, but because they are most often made with highly processed ingredients.)

But how do all the newcomers perform at the table?

The Times restaurant critic Pete Wells, our cooking columnist Melissa Clark and I lined up both kinds of new vegan burgers for a blind tasting of six national brands. Though many people have already tasted these burgers in restaurants, we wanted to replicate the experience of a home cook. (To that end, Melissa and I roped in our daughters: my 12-year-old vegetarian and her 11-year-old burger aficionado.)

Each burger was seared with a teaspoon of canola oil in a hot skillet, and served in a potato bun. We first tasted them plain, then loaded with our favorites among the classic toppings: ketchup, mustard, mayonnaise, pickles and American cheese. Here are the results, on a rating scale of one to five stars. 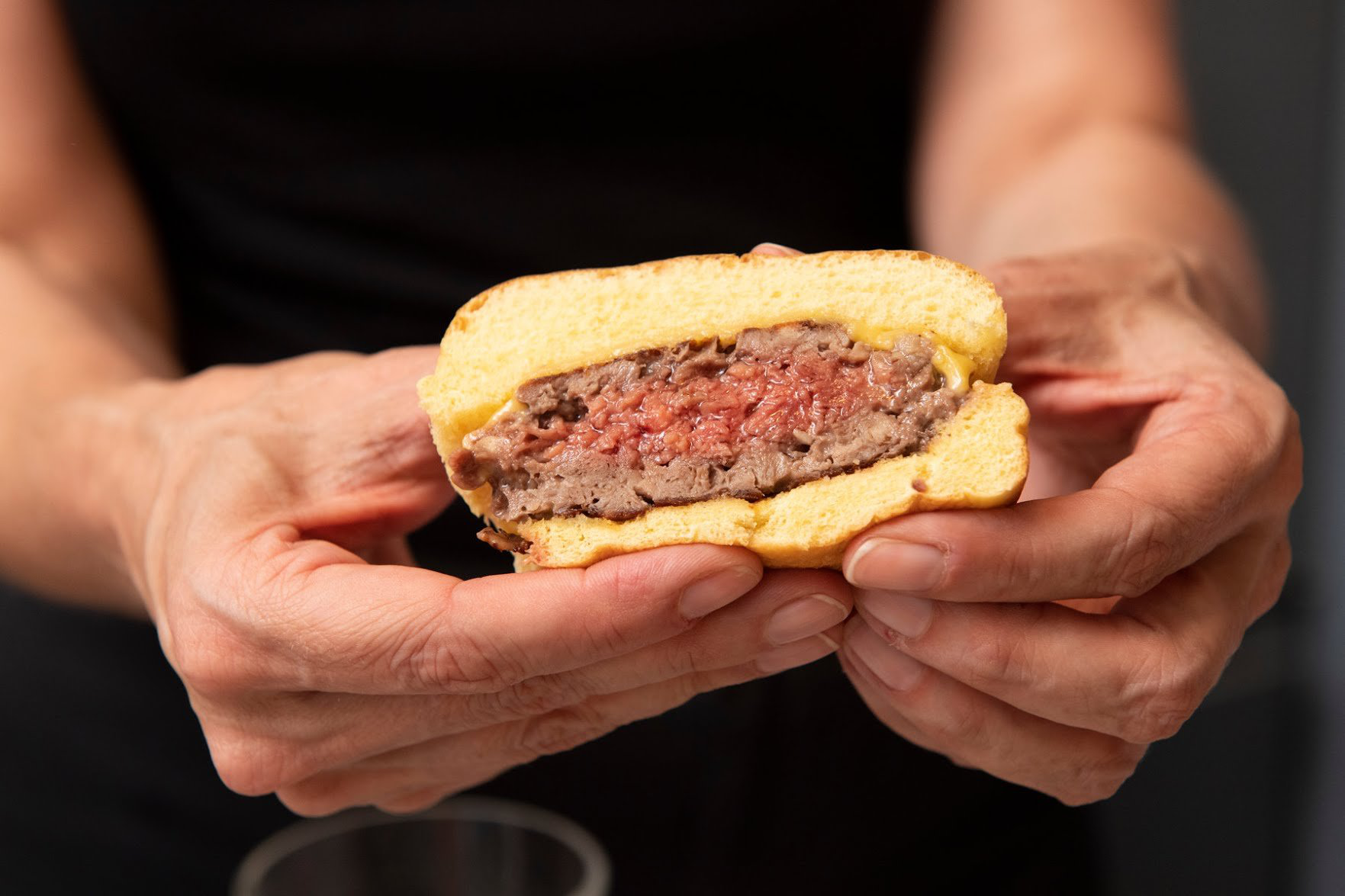 Slogan “Made From Plants For People Who Love Meat”

Tasting notes “The most like a beef burger by far,” was my first scribbled note. Everyone liked its crisp edges, and Pete noted its “brawny flavor.” My daughter was convinced it was a real ground beef patty, slipped in to confuse us. The only one of the six contenders that includes genetically modified ingredients, the Impossible Burger contains a compound (soy leghemoglobin) created and manufactured by the company from plant hemoglobins; it quite successfully replicates the “bloody” look and taste of a rare burger. Melissa deemed it “charred in a good way,” but, like most plant-based burgers, it became rather dried out before we finished eating.

Tasting notes The Beyond Burger was “juicy with a convincing texture,” per Melissa, who also commended its “roundness, with lots of umami.” Her daughter identified a faint but pleasing smoky flavor, reminiscent of barbecue-flavored potato chips. I liked its texture: crumbly but not dry, as a burger should be. This burger was the most visually similar to one made of ground beef, evenly marbled with white fat (made from coconut oil and cocoa butter) and oozing a bit of red juice, from beets. Over all, Pete said, a “real beefy” experience. 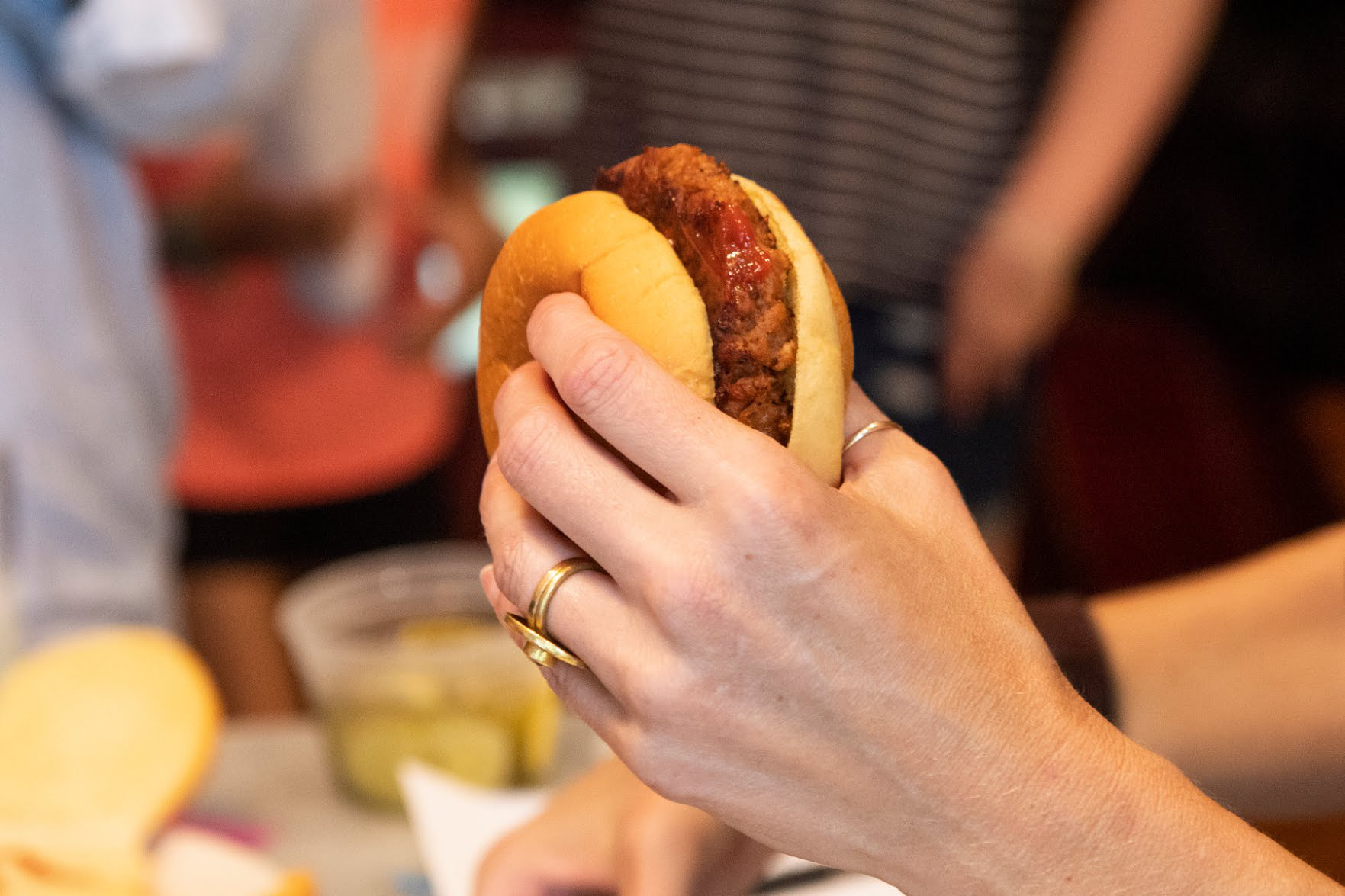 Tasting notes “Warm and spicy” with a “crisp exterior” according to Melissa, the Lightlife burger is a new offering from a company that has been making burgers and other meat substitutes from tempeh (a fermented soy product with a sturdier texture than tofu) for decades. That’s probably why it nailed the “firm and chewy texture” that I found a little bready, but “not worse than most fast-food burgers.” “Pretty good when loaded up” was Pete’s final verdict. 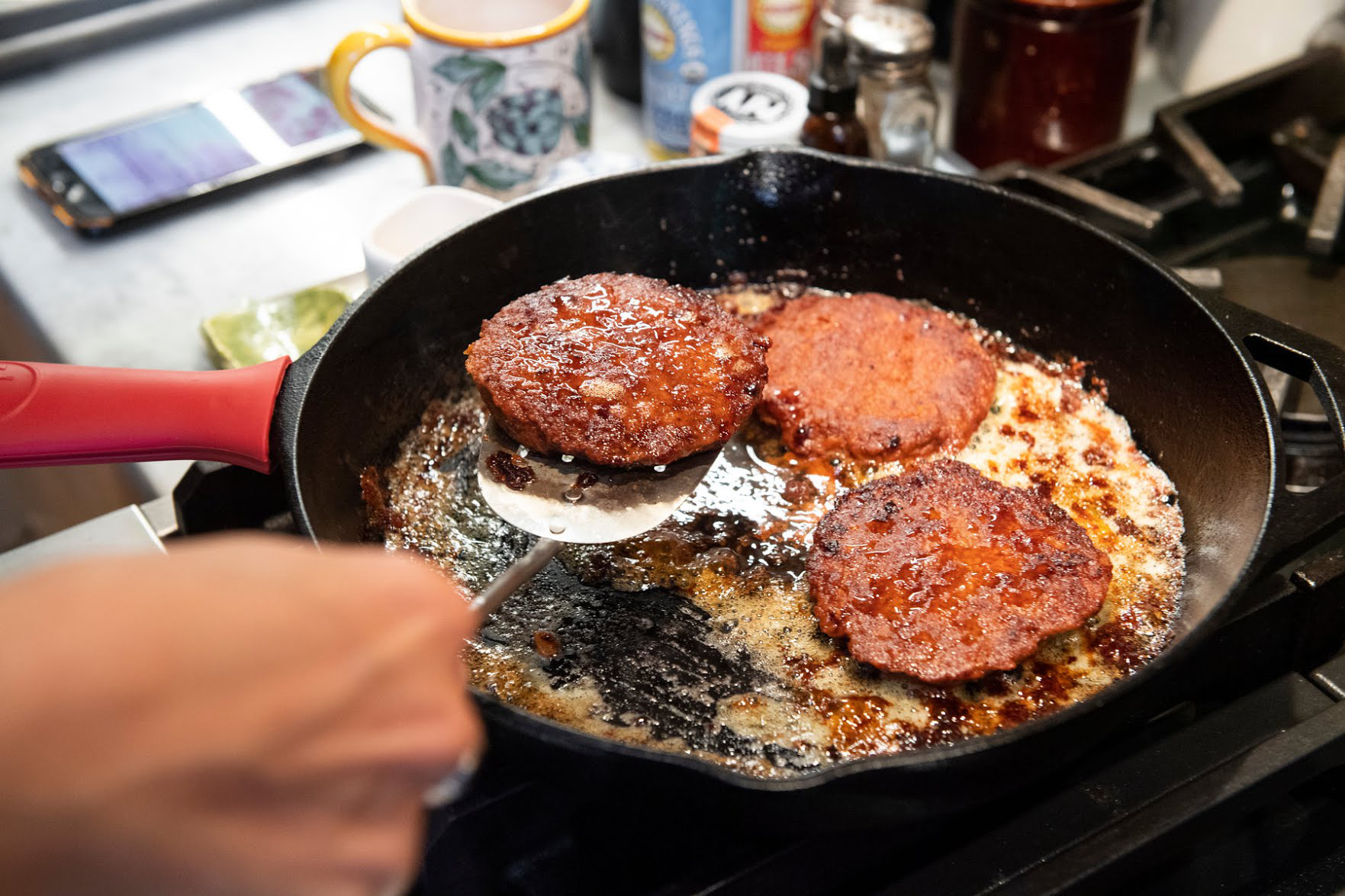 Maker Before the Butcher, San Diego

Tasting notes The Uncut Burger, so named by the manufacturer to imply the opposite of a cut of meat, actually rated among the meatiest of the bunch. I was impressed by its slightly chunky texture, “like good coarse-ground beef,” but Melissa felt it made the burger fall apart “like wet cardboard.” The taste seemed “bacony” to Pete, perhaps because of the “grill flavor” and “smoke flavor” listed in the formula. (To food manufacturers, they are not quite the same thing: one is intended to taste of charring, the other of wood smoke.) 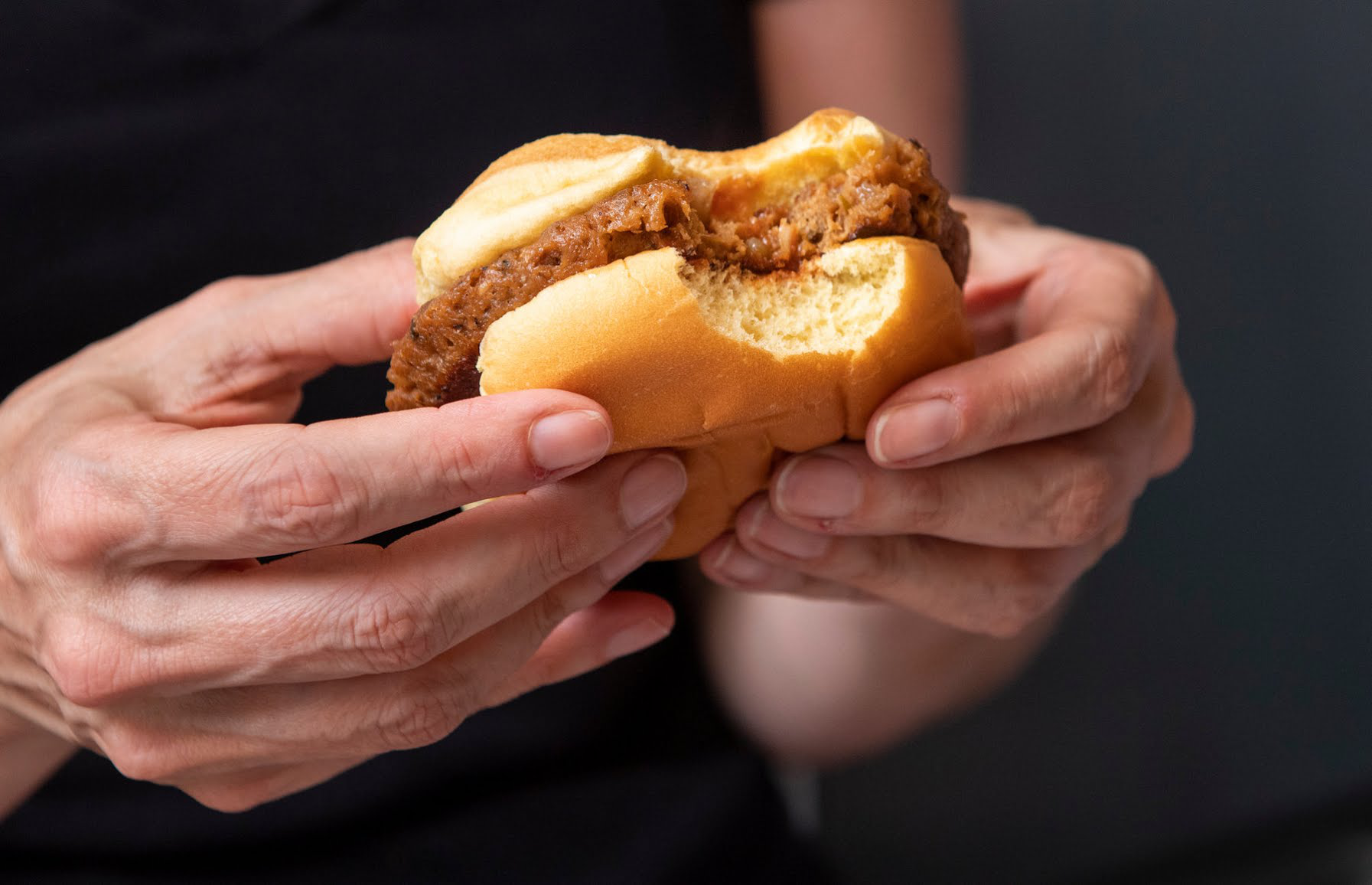 Tasting notes Not much like meat, but still “much better than the classic” frozen vegetarian patties, to my mind, and the consensus choice for a good vegetable burger (rather than a meat replica). Tasters liked its “vegetal” notes, a reflection of the onions, celery and three different forms of mushroom — fresh, dried and powdered — on the ingredients list. There was some crispness to like in the crust, according to Pete, but the bready interior (it contains gluten) was not popular. “Maybe this burger would do better without a bun?” he asked. 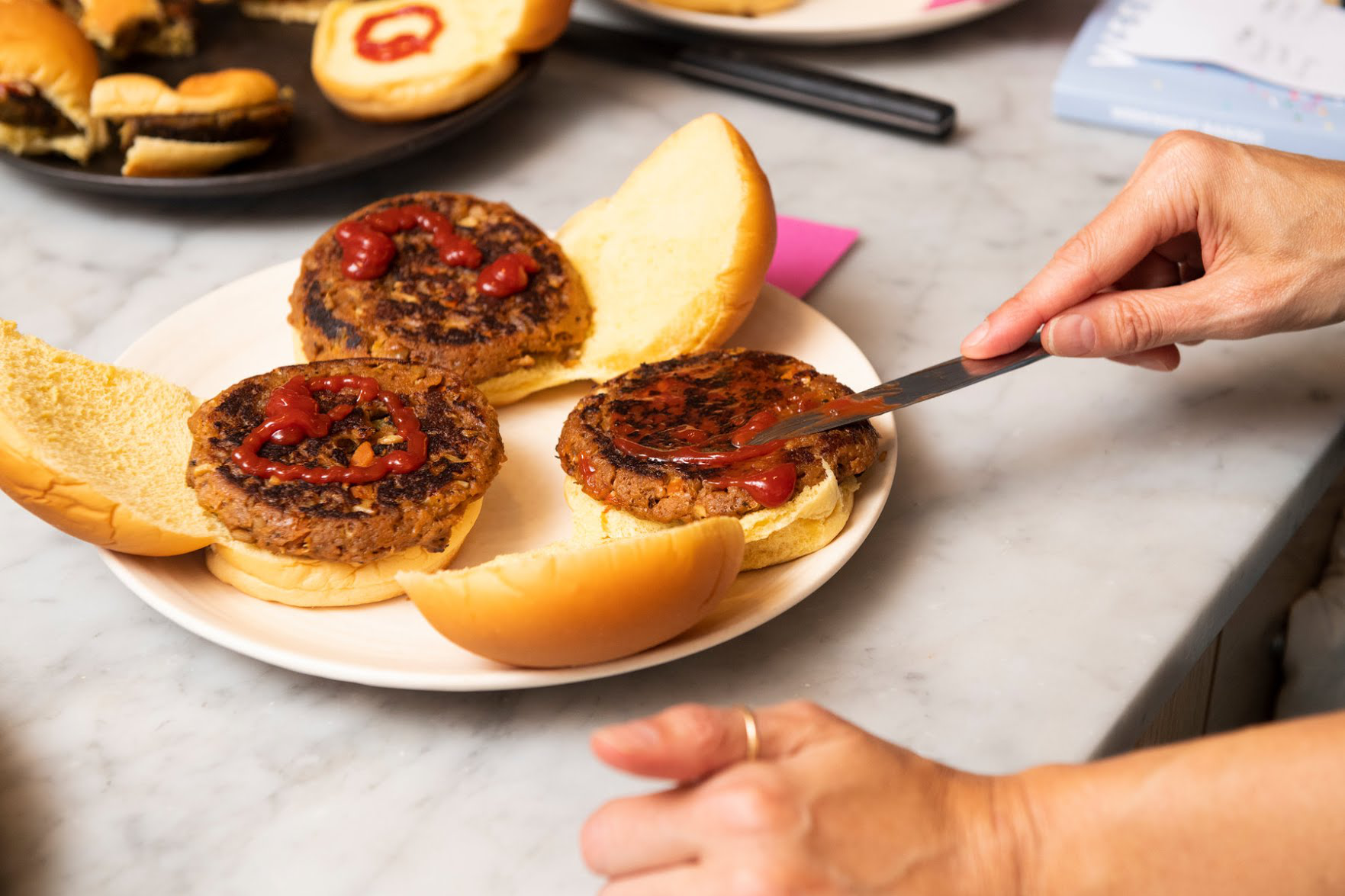 Price About $4.25 for two four-ounce patties.

Tasting notes This burger is sold only in flavors; I chose Mediterranean as the most neutral. Tasters liked the familiar profile of what Melissa declared “the burger for people who love falafel,” made mostly from chickpeas and bulked out with mushrooms and gluten. (Called “vital wheat gluten” on ingredient lists, it is a concentrated formulation of wheat gluten, commonly added to bread to make it lighter and chewier, and the main ingredient in seitan.) The burger wasn’t meaty, but had “nutty, toasted grain” notes that I liked from brown rice, and whiffs of spices like cumin and ginger. This burger is a longtime market leader, and Sweet Earth was recently acquired by Nestlé USA on the strength of it; the company is now introducing a new plant-meat contender called the Awesome Burger.